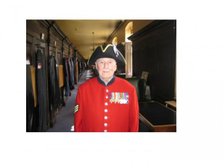 Eric was born in Wakefield West Yorkshire in 1924. With the outbreak of war he joined 7th Battallion The Parachute Regiment, he saw a great deal of active service rising to the rank of sergeant. He was stationed latterly in the war in Leicestershire and met and married Hazel, a local girl in 1946 and has been a resident of Wigston ever since, they have one son Jim. Eric had always been a very keen and active sportsman and for his sins supported Leicester Tigers for many years, with the coming of the professional era in rugby union, he like many others returned to the grass roots of the game and became an enthusiastic supporter of South Leicester and a few years ago was invited to, and became a Vice President of the club.

He has made many friends and enjoyed some great times with South. Unfortunately in 2003 Hazel, his wife, died and of late decided that living alone was not for him.His wartime service qualified him for entry as a Chelsea Pensioner at The Royal Hospital Chelsea, which after a great deal of thought he accepted, moving down there on 26th January this year.

The series Once A Soldier shown recently on BBC TV has given many people an insight into the lives of The Chelsea Pensioners. Eric was getting on really well, making new friends and enjoying life down there until a couple of weeks ago he suffered a heart attack, which could have proved very serious had he not received immediate expert treatment

Im sure all at South Leicester Ruby Club especially his fellow Vice Presidents would like to send him their very best wishes for a full recovery and continued good health and would look forward to seeing him again soon.